Ted Corbitt competed for the NYPC his entire road running career starting in 1947.

*The club was co-founded in 1936 by Mr. Joseph Yancey an African American.
*The club was known not only for the world class athletes in track & field, race walking, and long distance running, but also known for accepting athletes of all abilities.
*The NYPC was a model for racial integration during the Jim Crow era of segregation.  The athletes were of all races and creeds.
*Mr. Yancey’s vision was ten years before integration occurred in the NFL (1946), MLB (1947), and NBA (1950).

In 1952 became the first African American to represent U.S.A. in the Olympic Marathon

Portraits of running icons Grete Waitz and Ted Corbitt — two legends who took long distance running to extraordinary fame in New York City — were unveiled Tuesday at The Armory. The portraits are showcased in the National Track & Field Hall of Fame.

Won the National Marathon Championship at Yonkers in 1954

*Became the first African American to win a national marathon championship.
*Yonkers Marathon is the second oldest marathon in the U.S. dating back to 1907.
*Yonkers was the U.S. National Marathon Championship race from 1938 to 1966.
*This victory was on May 16th and was son (Gary’s) third birthday.
*On May 17, 1954 was the landmark Supreme Court decision Brown vs. Board of Education which paved the way for integration and the civil rights movement.

*The race was held April 29 – May 5, 2001 on the Ward’s Island a one mile loop in New York City.
*The race was conducted by the Sri Chinmoy Marathon Team.

During the 1950s Ted Corbitt was consistently among the top 5 American finishers at the Boston Marathon.

*His heart beat rate was very high and the doctors disqualified him along with Al Confalone and John Lafferty.
*All three ran the race unofficially starting 100 yards behind the field.
*Ted Corbitt finished in 6th place, Al Confalone was 7th, and John Lafferty was 9th.
*Ted Corbitt high heart beat rate was due to race day excitement and the possibility of a 3rd place finish.

Ted Corbitt’s marathon personal record of 2:26:44 was set January 5, 1958 at the Shanahan Marathon in Philadelphia

*At the time this was the third fastest time ever recorded by an American.
*John J. Kelley and Nick Costes were the two Americans to have ever run faster
Milestone #14
Ted Corbitt was the second person in road running history to finish 100 marathons.

*This was achieved at the 1966 Yonkers Marathon which was the national championship race.
*He placed 22nd out of 105 starters in a time of 2:51:42.
*Mike O’Hara was the first runner to ever achieve this milestone in either 1962.

Ted Corbitt was history’s most prolific marathon runners from May 1969 until February 1981.

Ted Corbitt was ranked #2 in the world for Ultramarathons throughout the 1960’s.  This is based on his five appearances at the famed London-to-Brighton 52.5 mile road race.

*Ted Corbitt at London to Brighton:

*Bernard Gomersall was the dominant ultramarathoner of this era with four London-to-Brighton wins and one Comrades Marathon win.

*The race was the National A.A.U. U.S. 50 Mile road championship in Rocklin, California.
*Bob Deines set an American Record 5:15:19 with a 3 second win over Skip Houk.  Darryl Beardall was third in 5:18:55.
*Ted Corbitt finshed 6th in 5:34:01 at age 51 setting the still standing record.
*50 Mile split times during Ted Corbitt’s London-to-Brighton (52.5 mile) road races are unavailable.
*Below are Ted Corbitt’s estimated 50 mile times during his five London-to-Brighton appearances.  In his fastest effort he averages 6:26 per mile, and was 12 minutes faster than the Rocklin race.

*The race was held at Walton-on-Thames in England.
*This race was 4 weeks after his 2nd place London-to-Brighton 52.5 mile effort
*Ted Corbitt finished 3rd in this race.  The winner John Tarrant set a World Record 12:31:10.
*The previous American Record held by an amateur was James Saunders February 21, 1882 at the American Institute Ring, New York indoors.  His time was 17:36:14.

*The race was held at Walton-on-Thames in England.
*Ted Corbitt finished 3rd in this race.  The race was won by Ron Bentley in a world record distance of 161.3 miles.
*The previous American Record was held by Jared R. Beads who ran a solo 121.25 miles in 22 hours, 27 minutes at Westport, Maryland in October 1969.

*The race was held at Walton-on-Thames in England.
*This race was 3 weeks after his 5th place London-to-Brighton 52.5 mile effort.
*Ted Corbitt finished 5th in this race.  The race was won by Allan Phillips in a world record time of 5:12:39.
*The previous American Record was held by Hugo Kauppinen of Finnish-American A.C. in the New York Metropolitan A.A.U. 50 Mile track race on Staten Island in May 1934.  His time was 6:46:10.

*This was one of the first races put on by the newly established New York Road Runners Club.
*There were 12 starters and 6 finishers.
*The Cherry Tree Marathon held during the 1960’s was the predecessor race to the New York City Marathon.

*There were 14 starters and 4 finishers.
*The race was conducted on MaCombs Dam Park course in the Bronx at Yankee Stadium
*Mike O’Hara won a 30 mile race on the same course in 1958 in a time of 3:33:17.
*Mike O’Hara was second in 30 mile race in 1955 3:37:15 on the MaCombs course.  There’s no record available who won this race.
*One of the first known Ultramarathon races in the U.S. was from Providence to Boston that dates back to the 1920s.

Milestone #25 - Never dropped out of a race

*This was the only time he ever dropped out of a race over 59 years of running and walking road races from 1947 to 2006.
*He had trained well for this race but was suffering both from a cold (the result of getting caught out in a thunderstorm during a recent training effort) and a sore ankle that he had sprained the week before.
*The race director Richard Innamorato of this Broadway Ultra Society event says the following:
“He could have finished but felt he couldn’t make the 30-hour deadline.  I wished I would have known sooner or I would have extended the deadline.  But he was fine about it.”
*The race was won by Roy Pirrung in 14:31:11.

Ted Corbitt in 1978 was the first recipient of the prestigious Abebe Bikila Award that recognizes outstanding contribution to the sport of distance running.

Ted Corbitt won four National Amateur Athletic Union (AAU) Championships from 1954 to 1968.  He was named to the All American AAU Track & Field Team in each of these four years.

Ted Corbitt won the first Philadelphia Marathon in 1954.  The race was known as the Shanahan Marathon from 1954 to 1965.

*There were 10 starters in 1954.
*Winning time was 2:36:06 over a four lap course at Fairmount Park.
*Ted Corbitt’s four wins in the Philadelphia Marathon are the most wins to date for this race.

Ted Corbitt was one of the first distance runners ever to use weight training.  He started to use Progressive Resistance Exercises to build muscle strength while at the University of Cincinnati (1938 – 1942).  He used pulley weights while in college.  His real drive to use resistance exercises came from studies in becoming a physical therapist.

Ted Corbitt’s best competitive racing year was 1957.  He placed top three in four of five national championship races from 15k to the marathon.

Ted Corbitt began formal training in 1936 at Woodward High School in Cincinnati.  In high school he competed at 100, 220 Low Hurdles, 880, and Relays.

Ted Corbitt was among the first distance runners to do what became known as Interval Running.  He got the idea while in high school in 1937 watching a rival high school team in Cincinnati train.  Also being a Boy Scout he learned about the Little Wanamaker Mile where you walk 55 yards and then run 55 yards and keep repeating this until you cover a mile.  He experimented with interval training at the University of Cincinnati and adopted it fully in the late 1940s as he began his distance running career.

In the 1920s, Pavvo Nurmi trained alternating slow and then fast running to increase stamina and endurance.
In the late 1930s, two German physiologist Reindell and Gerschler develop the concept of Exercise Heart Range and exact rest periods for the heart to return to a particular levels before the next   interval.
In the 1940s, Gunder Haegg and Arne Anderson came close to breaking the four minute mile using the technique of speed play which is called farlek in Swedish.
Ted Corbitt would do 60 X 440 with a 220 jog interval sessions.  This was a workout made famous by Emil Zatopek the 1952 3-time gold medalist at the 1952 Olympics.

Milestone #37 - Would run to work everyday

Ted Corbitt was one of the first long distance runners (early 1950s) to do a lot of running in the streets, as training, by running home to work or work to home or both ways.  Postman Mike O’Hara and policeman Edo Romagnoli both of Queens, New York ran to work at times in the 1940s.  Clarence DeMar was the first to run to and from work.  Ted Corbitt exploited the idea to an extreme by comparison.  For example on two occasions in 1973, he ran 50 miles on a workday with three workouts.  Also in 1973 he ran 207.2 miles on five work days.

*Ted Corbitt began using the term ultra-long distance runs in a 1962 correspondence with Browning Ross and an article “Racing from London to Brighton.”
*Andy Milroy believes the worldwide adoption of the term ultramarathon began after the January 1967 article by Ted Corbitt in Distance Running News called   “Aspects of Running Ultramarathons Races.”

Ted Corbitt ran two workouts per day for 13 consecutive years from January 1955 to July 24, 1968.  During the third workout on this 36 mile July training day (20 miles to work; 3 miles lunchtime; 13 miles to home) Corbitt encountered a dog on the run home that led to an injury ending the streak.

Berwick Marathon – Run for the Diamonds
This Thanksgiving Day race with a 103 year history, dating back to 1908, was unique in that road racers would face track and cross-country specialist along with college athletes over this 9 mile course in Berwick, Pennsylvania.

Ted Corbitt’s ability to be competitive in all distance from 15 Kilometers and longer is illustrated in his performances at Berwick.  On three occasions, he finished among the top 10 finishers; 1954 10th, 1955 6th, 1958 8th

Ted Corbitt on two occasions totaled 50 training miles on a workday as a Physical Therapist.  He was preparing for a 24 hour race in England.

From 1954 – 1959, Ted Corbitt ran in 21 Senior New York Metropolitan AAU Championship races ranging in distances of 15K to the marathon.  In 90% of these championship races, he finished among the top 3 runners. 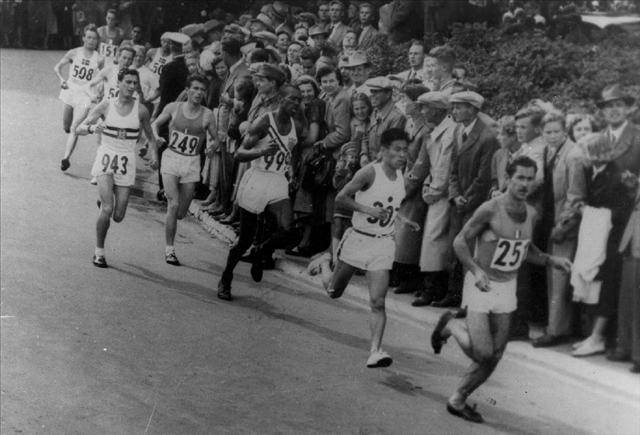 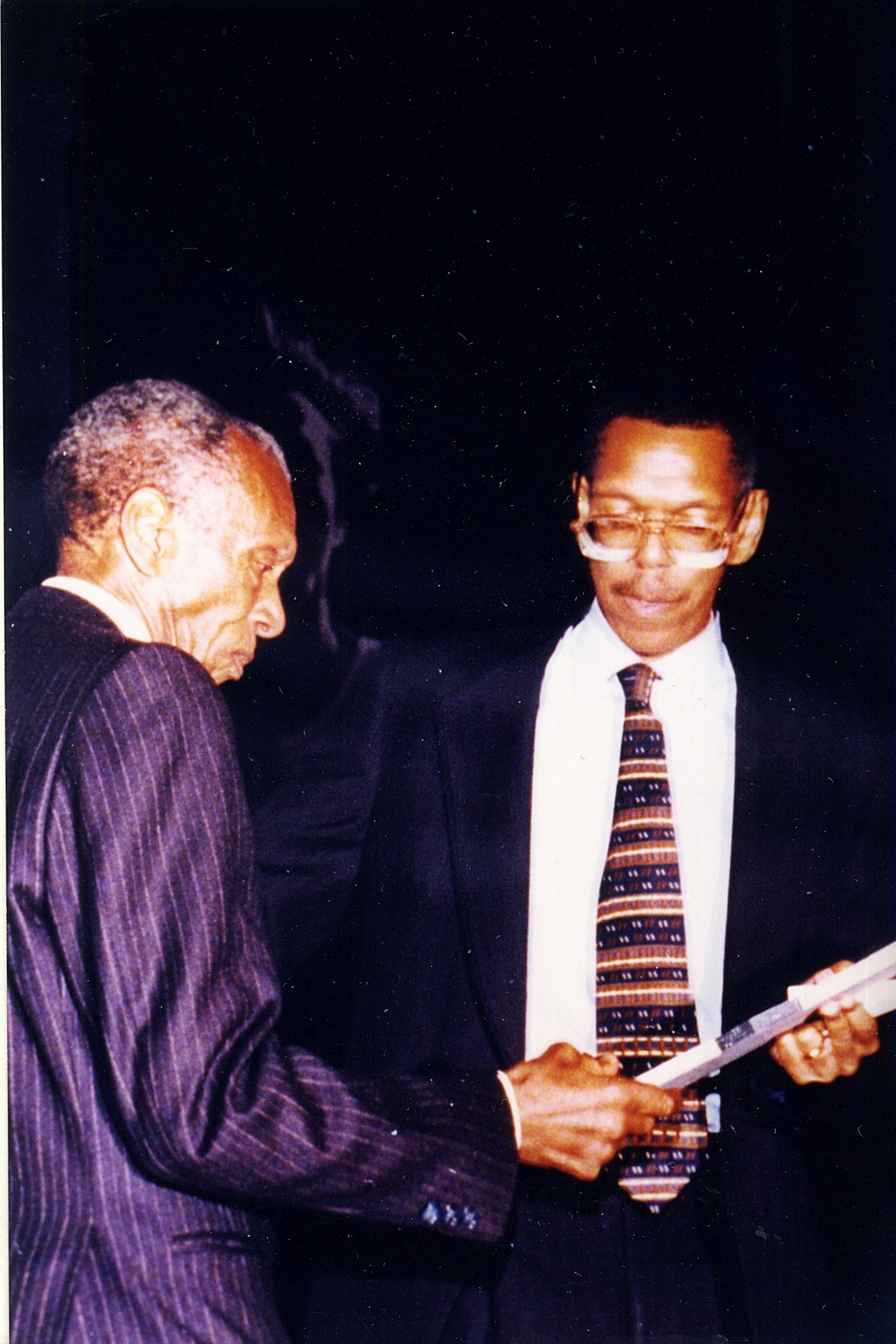 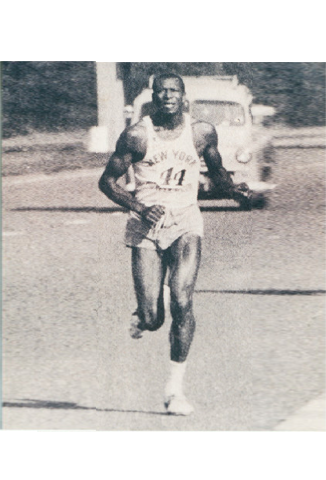 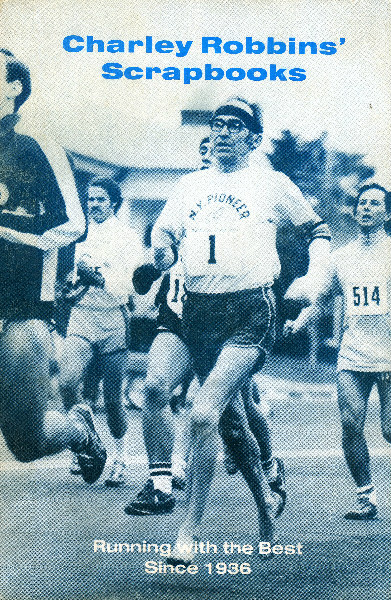 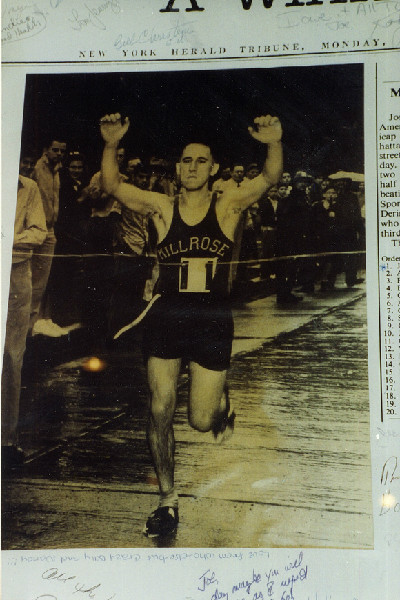 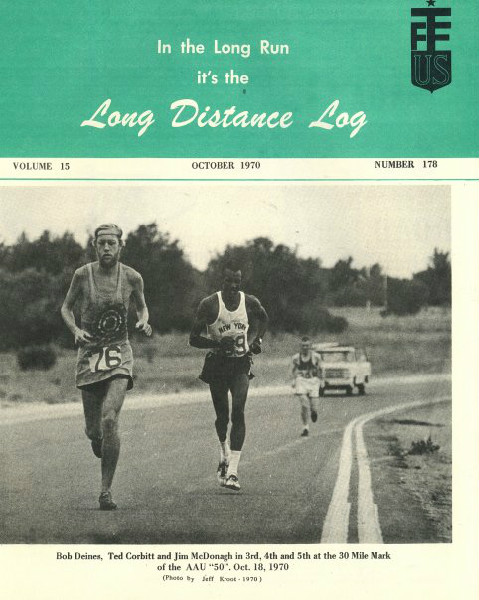 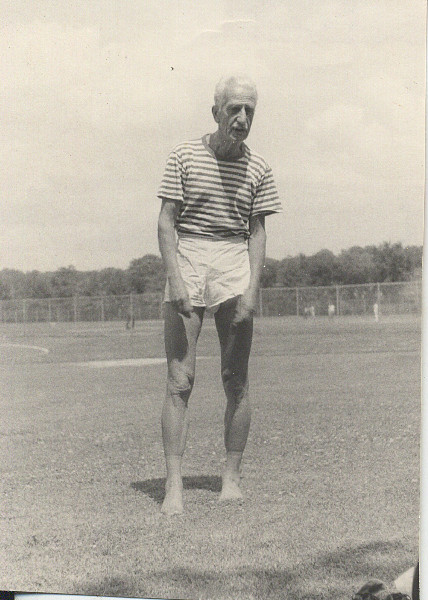 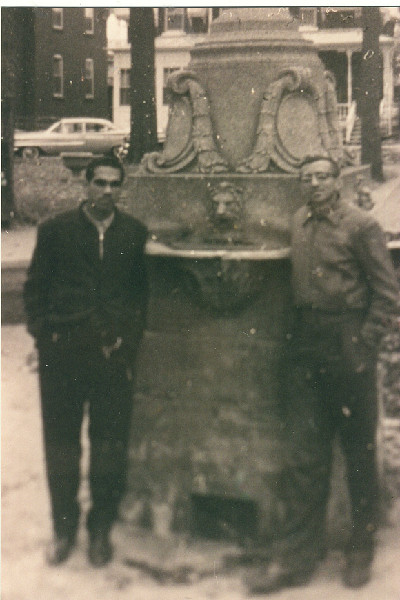 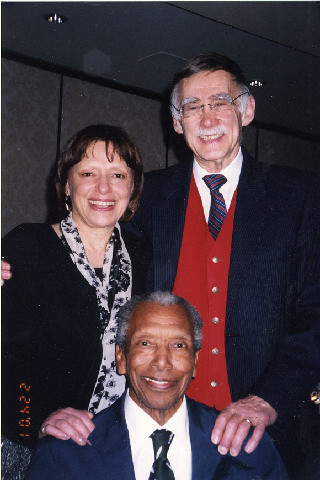 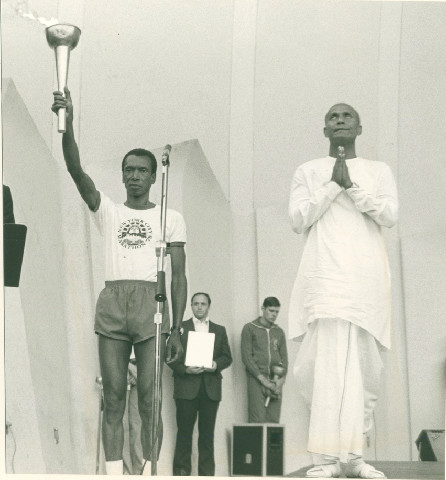 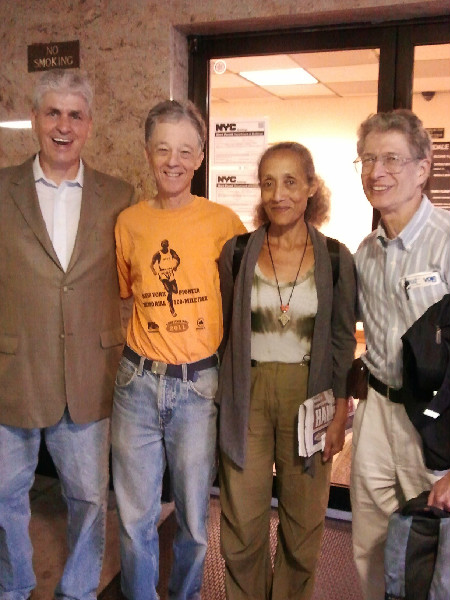