The athletic club was founded in 1936 by three African Americans; Joseph J. Yancey, Robert Douglas and William Culbreath in 1936 in Harlem, New York. Robert Douglas was manager of the Renaissance Casino and the Harlem Rens Basketball team.

The object of this organization is to support, encourage, and advance athletics among youth of the New York Metropolitan district, regardless of Race, Color or Creed.
To encourage and further the ambition of our youth for higher education that they might become intelligent, civic – minded citizens, and to work toward a better racial understanding through the medium of education and sports.

The Pioneer Creed: The Pioneer Club, a club of gentlemen and athletes. This does not signify mere outward refinement. It speaks of a refined and noble mind, to which anything dishonorable, mean or impure is abhorrent and unworthy.

The NYPC team was a means of building men of character; gentleman as athletes and citizens. Gentlemen first, athletes second

Is a historic National Guard armory in Harlem, New York for the 369th Infantry Regiment that fought in World War 1 for the French Army. They were known as “The Hellfighters of Harlem” based on their distinguished war record.

The NYPC trained and held track meets at this armory for many years.

NYPC was one of the first large scale inter-racial clubs in any sport amateur or professional.

This integrated club fielded championship athletes and teams in all disciplines.

Served as a model for other track & field teams:

One was inclusive and other exclusive

Co-founded the New York Pioneer Club in 1936 and became its first coach.  Joe’s coaching career spanned a half century.  He coached numerous indoor and outdoor national champions, including 18 Olympians.

He was the first coach to go abroad for the U.S. State Department, traveling around the world to coach, give lectures, conduct clinics and serve as a good will ambassador.

All of these accomplishments were done on a volunteer basis.  Joe Yancey was a revenue officer with the Internal Revenue Service for over thirty year.

Joe Yancey devoted the majority of his life and much of his money to keep the New York Pioneer Club going.  He always was true to the “welcome all” policy.  All Joe asked was that they be gentlemen first, athlete second.

Joe did a lot of talking about being a gentleman first and the values of sportsmanship and growing up to become good citizens.

Other New York Pioneer Club (NYPC) History Themes:
The NYPC was instrumental in the formation and survival of the New York Road Runners Club (NYRR) in 1958.  Joe Yancey was the first coach to join NYRR.  Today this running organization is the largest local running community in the world boasting over 60,000 members.

NYPC members became leaders in many areas outside of sports.

Running clubs like the University of Chicago Track Club followed the lead of NYPC fielding an integrated team.  A case can made that the sport of running was a leading force in racial integration in the 1940s, 1950s, and 1960s.

NYPC  was unique in many ways, including the number of champions in Track & Field, Road Running, and Race Walking.

I had a unique perpective being a part of the early days of the New York Road Runners Club.  I was a child - teenager watching the foundation of our sport being built.  Today I want to recognize the names of people I witnessed making history.

NYRR history starts with the New York Pioneer Club (NYPC) and Mr. Joseph Yancey an African American who co-founded the club in 1936.  There wouldn’t have been a NYRR in 1958 without the Pioneer Club.  The Pioneer Club was special; an integrated club made up all nationalities and abilities.  The NYPC was making civil rights history in Harlem and the Bronx during an era of racial segregation.  The beauty and genius of Mr. Yancey was coaching an athletic team that was a vehicle for his primary mission of building men of character.  Talk with Elliott Denman NYPC race walker who’s here today to further understand this.

Pamela Cooper in her fine book “The American Marathon” states the NYPC is significant in its contribution to the democratization of sport, particularly running.
The club helped to invent the mass marathon culture that we’ll witness again on Sunday. The huge open fields of today’s marathons owe much to Joe Yancey’s acceptance of all young men as potential athletes.

My father joined the NYPC in 1947.  He considered his teammate John Sterner a race walker and long distance runner the founder of NYRR.  John was also one of my father’s mentors in course measurement approaches.  The Cherry Tree Marathon was one of first events staged by the NYRRC: New York Association in 1959.  The race was New York City’s showcase marathon during the 1960s run along the Sedgwick Avenue course at MacCombs Dam Park and Yankee Stadium in the Bronx.  I believe this was also the first road course to be certified in the U.S.

A review of the 47 members of the club in 1959 shows that nearly half were pioneer club athletes.

Of the nine presidents of NYRR, four represented the pioneers along with my father were Nat Cirulnick, John Conway and Allan Steinfeld

Women were unable to compete in distance greater than 220 yards in the U.S. during the 1950s. Chris McKenzie and Ann Cirulnick were leaders trying to change this.  They were married to Gordon and Nat, NYPC teammates, and were the original running couples in the 1950s and early 1960s.

Other NYPC members who worked tirelessly for our sport were Kurt Steiner who gave me my first basketball, Harry Murphy who recruited my father to join in 1947; Lou White who gave me my first and only motorcycle ride; Jimmy Borden who went on to start the United Athletic Association, and NYPC Coaches Ed Levy and Horace Wall should also be cited.

At 25th Anniversary of the club in 1983, my father wrote the following:  The most visible member of the club is Fred Lebow who roams far and wide taking care of running business.  Many people mostly “unsung heroes” have pitched in to make the NYRRC what it is today.

Barry Geisler a leader in age-group track and cross-country programs.
Vincent Chiappetta worked on a local and national level towards updating rules and procedures.  He worked hard to allow women to participate and was instrumental in races taking place in Central Park.
Joe Kleinermann may have put in more hours promoting long-distance running than anyone in New York area running history.
Kathrine Switzer who established the Avon Products running program which further benefited women runners around the globe.
Nina Kuscsik an officer in the RRC and AAU and inspiration and role model.
Aldo Scandurra an early ultramarathon promoter who had influence on all governing aspects of our sport local, national, and international.
Allan Steinfeld who became an influential force with the international marathon race directors.
My father said that each of these individuals made the sport more runner friendly.

This honor is special to me because NYRR was my father’s home base for all his many contributions to the sport.  The production and distribution of NYRR newsletter now called New York Runner was a family affair.  It was printed on a mimeograph machine on our kitchen table.  I distributed the newsletter at the major races like the Cherry Tree Marathon or 9 mile cross-country race at Van Cortlandt Park. My mother Ruth would mail the remaining newsletters. Race entry forms, publications and other collateral materials during this era were all printed on our kitchen table.

I always like to point how important my mother Ruth was to all my father’s accomplished.  She was always supportive with his legendary training, his administrative paper work that kept him typing past midnight, and his continuing education as physical therapy clinician and teacher.

I want to thank you for attending this ceremony.  A number of you were dear friend of my father and I’m thankful you can share this day with me.  In researching his life and fielding recent questions from reporters, I’ve gained an even better understanding of what my father was about.  The spiritual side was reflected in how he would always help people, and how he merged his physical therapy knowledge to assist anyone who asked.  In giving, he was receiving.  He was constantly taking continuing education classes.  So in helping people, he was furthering his knowledge.  That’s what he really was about.

I thank Mary and George and the New York Road Runners for this honor, and let’s do all we can to remember these pioneers and preserve this history of our sport.  Thank You. 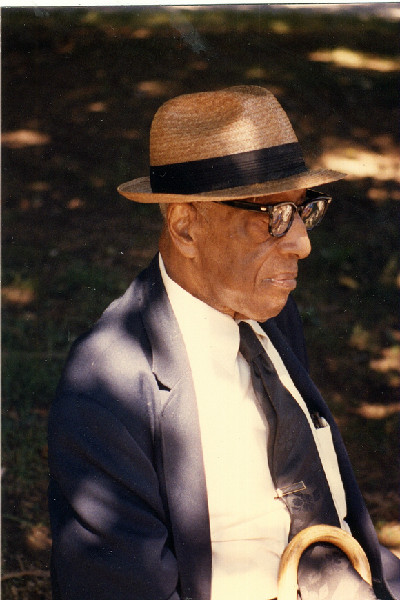 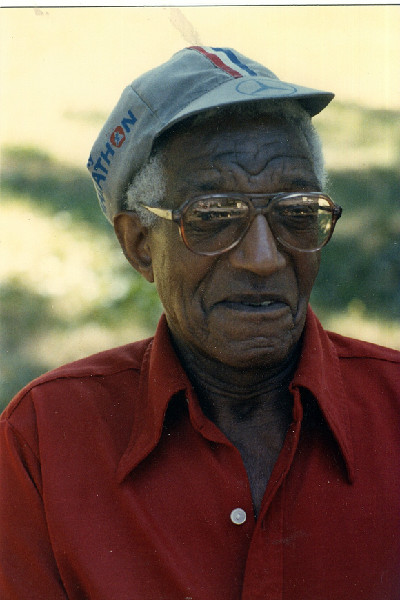 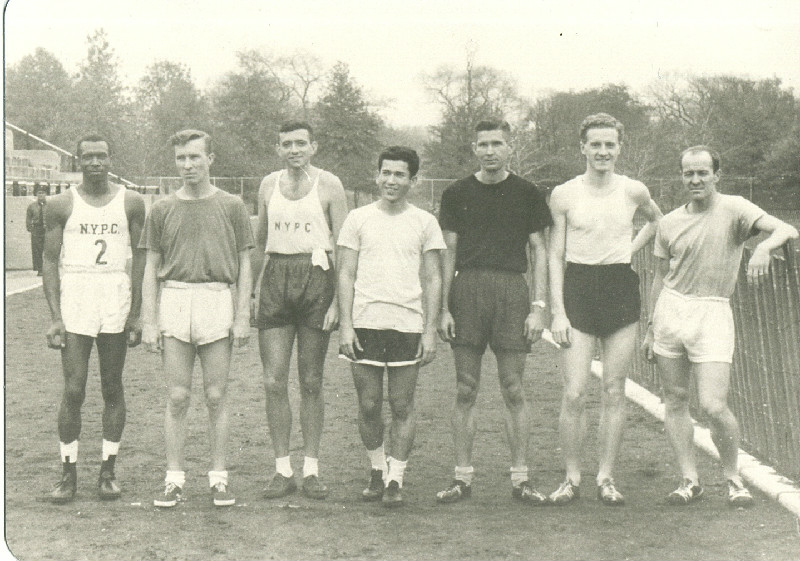 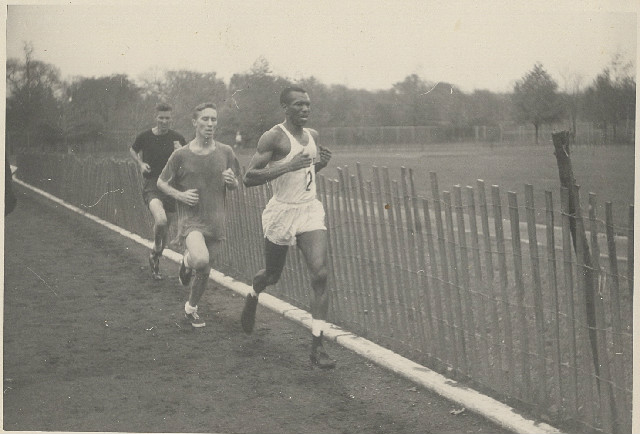 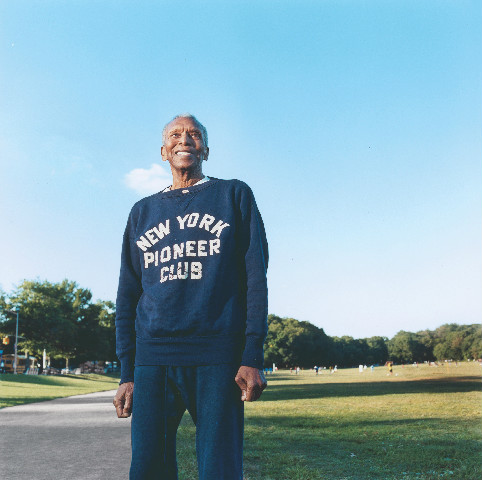