These nine women were part of group of pioneers who competed and fought for women’s equality in running in the 1950s and early 1960s. Throughout most of the 1950s the longest distance United States women could officially race was 220 yards.

Here are the presentation times for each panelist for this nearly three hour call.

This is the first of a series of call to honor the early women pioneers of ultramarathon running.

My mother Aida Keshishian Price is in the video clip, walking and talking with your father, and then speaking about him at the end.  He had been her physical therapist 40 years earlier.

Ted Corbitt had become my mother’s physical therapist in 1954 at the International Center for the Disabled (ICD) when she was 17 years old.  She had just lost most of her left leg to bone cancer, and had a 5% chance of surviving that cancer for only two years (surgery was the only option then, and she mentioned that two young men who had similar amputations due to cancer around the same time both died within two years), and so she began going to ICD.

Your father came to my mother at what had to be one of the lowest points in her life, encouraged her without end, and taught her to walk unbelievably well both on crutches and with prosthesis.  She wound up walking with crutches most of the time, as in the video, because she felt it was faster and easier in many ways.  It was really something to experience her on crutches; she walked most two-legged people into the ground and your father had much to do with that.

This is the second of a series of calls to honor the early women pioneers of ultramarathon running.

This race was given the name of “The Torture in the Holyoke Tropics.” It was a national championship race with the winner making the Pan American team. All the top runners were there in 90 degree heat and humidity with a 1p start time. Ron Daws won and Jim McDonagh placed 2nd.

Buddy Edelen’s 2:24:25 was one the greatest performances ever in marathoning history. When couple the 12n start, 91 degree temperatures and humidity, along with Edelen winning by a 3.5 mile margin made this race day legendary. Also at stake was the winner making the Olympic team.

Call participants and time of their discussion: 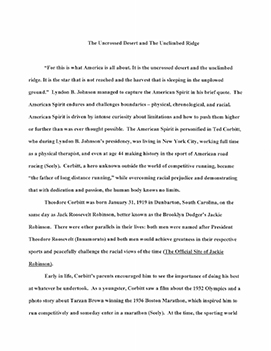 May 2005
The assignment was to write about someone who embodied the American spirit for a U.S. history class. When Jean presented the paper, she asked a classmate to assist her by performing jumping jacks alongside her as she made her 10-minute presentation, to try to illustrate, in a way her classmates might understand how much endurance would be required to perform as Ted Corbitt did. 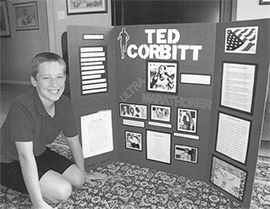 2011
My 12 year old Son had to do an African American history project recently. He had to choose a person and create a board displaying pictures, a biography, a poem, a monologue, and a made-up interview of that person. I have the book First Marathons and was inspired by your Dad's story in that book. I had my Son read it and he was inspired as well and chose your Dad for his project. My Son is a runner and he just did his first half-marathon. Every 6th grader had to do a tri-fold board so there were about 75 boards lined up outside in the halls of the school. Justin was proud that his teacher put his board of Ted right by the office which is the first thing you see when you come into the school. He got an A on his board!